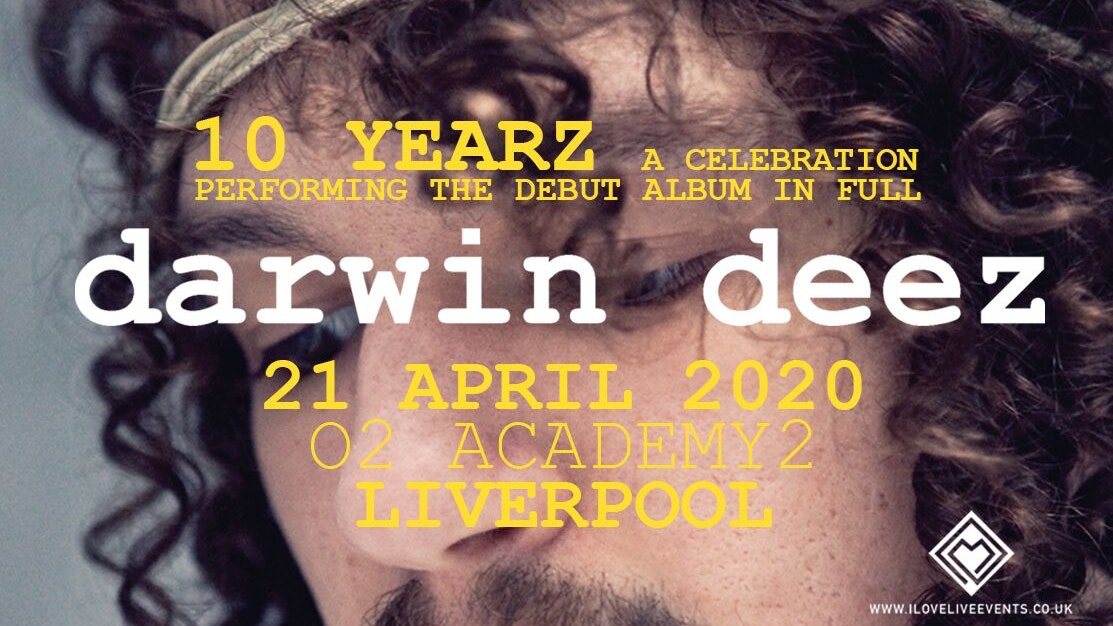 Born in North Carolina to Maher Baba disciples, Darwin grew up on a diet of Weezer, Nirvana and Toto, and started his first band with friends at age 12. After attending and promptly dropping out of Wesleyan University, Connecticut, Darwin moved to and found himself at home in New York City.

In the East Village, he became a fixture of Monday nights at the Sidewalk Café, a legendary stomping ground for NYC’s Anti-folk scene. Here Darwin came into his own as a performer, his live shows became extravaganzas of unbridled energy and unfettered joy and often broke into spontaneous bouts of synchronised dancing which can erupt anytime, almost out of nowhere.

A DIY ‘living room’ tour of Germany in 2009, opening for the NYC band Creaky Boards, brought him to the attention of, and led to a recording deal, with the UK independent label, Lucky Number.

There was nobody around quite like Darwin Deez, and his wonderfully off-kilter debut album, was testament to that fact. The songs are mostly stripped down and kept simple and unadorned (which figures, as he recorded the album in his own apartment using only a PC and a cheap microphone – Darwin Deez was the original ‘bedroom’ artist) but they pulse and throb deliciously with life and a rare wit. Certainly, it would be hard to think of anyone else who can start a song by cribbing “Twinkle Twinkle, Little Star” as the opening line (as on ‘Constellations’), while rhyming “Los Angeles” with “televangelist” (as on ‘Radar Detector’). However, it is also important to note that there is also an emotive undertow of sadness and longing in his oeuvre. By turns joyous and heart tugging, winsome and wistful, glorious and gorgeous, buoyed aloft by Deez’s ear for a soaring chorus and a catchy tune, not to mention his knack for a killer couplet, Darwin self-proclaimed the album as being ‘happy songs for sad people’.

Upon its release in April 2010 it was met, with universal praise from international radio and press, especially in the UK, where he was championed by BBC Radio One and also by the NME who named him the 10th coolest musician on the planet and placed him on their cover.

Now, in order to celebrate the 10th anniversary of the release, Darwin and band are excited to be touring the album once more. The album will be performed in its entirety at each show, in addition to a number of select songs from Darwin’s other releases to-date.

Singularly a brilliant, hilarious, complex, entertaining individual, Darwin Deez writes songs that will make you want to bust out your dancing shoes while also cutting to that raw, emotional nerve. Renowned for the most entertaining of live shows, with added choreographed dance routines, don’t miss your chance to witness a rare insight into everything a pop star should be, and yet so rarely is.

“…a giddy live act for which he and his virtuosic backup band bring the dance party onstage with disarming sincerity. Deez’s syrupy vocals skip playfully above highly danceable indie-pop grooves.”

“Prince-meets-Jonathan Richman. Artfully artless, his songs sound as if they have burst out of him, fully formed snap-crackle-pop gems that are somehow both  disposable and enduringly resonant”